An event arranged by Stockport for Peace.

War School reveals the ways in which the British government and armed forces are using a series of coherent and targeted strategies to promote military values to the British public and entice its children into joining the forces.

Armed Forces Day, Uniform to Work Day, Camo Day, National Heroes Day - in the streets, on television, on the web, at sports events, in schools, advertising and fashion - the military presence in UK civilian life is increasing daily. The Government has a comprehensive action plan and is spending over £100m targeting the education system and promoting public support for its war machine. Through veterans' testimony, archive and observation War School tells the untold story of Britain's century of perpetual war and the developing resistance to the new tide of militarism.

All are welcome to view the film, 84 minutes long, about the militarisation of children, and the long term effects. Friends House staff were involved in the film. The showing will be followed by a refreshment break and then speakers and discussion will start at 7.30pm. Speakers include the producer Mic Dixon, Veterans for Peace, Charlotte Cooper from Child Soldiers International who is the Quaker Peace and Social Witness peaceworker there, plus the East Cheshire Quakers' Peace Pathways peace education project, so we expect to progress ways to counter this influence. 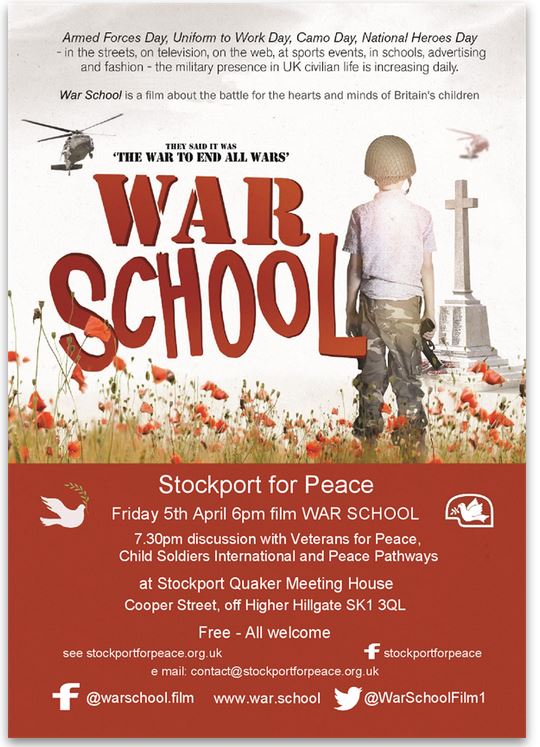